H. R. Giger is recognized as one of the world’s foremost artists of Fantastic Realism. Born in 1940 to a chemist’s family in Chur, Switzerland, he moved in 1962 to Zurich, where he studied architecture and industrial design at the School of Applied Arts. By 1964 he was producing his first artworks, mostly ink drawings and oil paintings, resulting in his first solo exhibition in 1966, followed by the publication and world-wide distribution of his first poster edition in 1969. Shortly after, he discovered the airbrush and, along with it, his own unique freehand painting style, leading to the creation of many of his most well known works, the surrealistic Biomechanical dreamscapes, which formed the cornerstone of his fame. To date, 20 books have been published about Giger’s art.

Giger’s third and most famous book, Necronomicon, published in 1977, served as the visual inspiration for director Ridley Scott’s film Alien, Giger's first film assignment, which earned him the 1980 Oscar for the Best Achievement in Visual Effects for his designs of the film's title character and the stages of its lifecycle, plus the film’s the otherworldly environments. Giger's other film works include Poltergeist II, Alien3 and Species.

Giger's album covers for Debbie Harry and the band ELP were voted among the 100 best in music history in a survey of rock journalists. Throughout his career, Giger also worked in sculpture and, in 1988, created his first total environment, the Tokyo Giger Bar, and in 1992 a second Giger Bar in Chur.

The HR Giger Museum, inaugurated in the summer of 1998 in the Château St. Germain, celebrates its 10 Anniversary this summer. The four-level building complex in the historic, medieval walled city of Gruyères, Switzerland is the permanent home to many of the artist’s most prominent works. It houses the largest collection of the artist's paintings, sculptures, furnitures and film designs, dating from the early 1960's until the present day. Displayed on the museum's top floor is Giger's own private collection of more than 600 works by artists such as Salvador Dali, Ernst Fuchs, Dado, Bruno Weber, Günther Brus, Claude Sandoz, François Burland, Friedrich Kuhn, Joe Coleman, Sibylle Ruppert, Andre Lassen, among many others.

The HR Giger Museum Bar, located in the adjoining wing of the museum complex, opened on April 12, 2003. Giger’s designs for the bar emphasizes the pre-existing Gothic architecture of the 400 year old space. The giant skeletal arches covering the vaulted ceiling, together with the bar’s fantastic stony furniture, evoke the building’s original medieval character and give the space a church-like feeling.

Since 1999, in an effort to help broaden the appreciation of his museum visitors for other Fantastic and Surrealist artists, Giger has utilized a three room exhibition space as The H.R. Giger Museum Gallery where, on a continuing basis, he features the works of other masters in this genre. Artists already shown have been Wessi, Prof. Ernst Fuchs, Hans Bellmer, Fred Knecht, Stelio Diamantopoulos, Martin Schwarz, Claude Sandoz, Günther Brus, François Burland, Rudolf Stüssi, The Society for Art of Imagination and Victor Safonkin.
​
He lived and worked in Zurich with his wife, Carmen Maria Giger, co-director of the Giger Museum.
Since the year 2004, Giger has been honored with a series of major museum retrospectives. September saw the opening of a six-month exhibition at the Museum Halle Saint Pierre in Paris, France. “Le monde selon H.R. Giger” (The World According to H.R. Giger) was the largest exhibition of the artistʼs work to take place outside of his native Switzerland. Over one year in preparation, ninety percent of the work on loan was assembled from Gigerʼs art collectors, including three Swiss museums. The display of more than 200 pieces, covering two floors of the museumʼs exhibition space, spanned four decades of the celebrated artistʼs career. On December 17, 2004, H.R. Giger received the prestigious award, “La Médaille de la Ville de Paris”, at Paris City Hall.

The Paris retrospective was followed by ʻH.R. Giger in Prague” in 2005 at the National Technical Museum of Prague, in the Czech Republic and in 2006 by “Giger in Wien” at the Kunsthaus Wien, in Austria. In July of 2007 Giger was honored with his first museum exhibition in the city of his birth, at the Bündner Kunstmuseum, in Chur, Switzerland, followed in October by his first major exhibit in Spain, at The Polytechnic University of Valencia.

In back-to-back shows, January 2009 heralded the opening of “KUNST - DESIGN – FILM”, a traveling retrospective of Gigerʼs film designs, at the Deutsches Filmmuseum in Frankfurt, Germany, which was followed by the opening of a major retrospective in October at the SALA KUBO – KUTXA, in San Sebastián, Spain.

In 2010, the traveling film retrospective moved to its next venue, the Tampere Art Museum in Finland. On the occasion of Giger's 70th birthday, the exhibition HR Giger in Obwalden is held in Sarnen, Switzerland.

In March of 2011, HR Giger - “Dreams and Visions” opened at the Kunsthaus Wien, Austria. 2012 saw exhibitions in Hamburg, Germany and Moscow and Istanbul.

In 2013 Giger is "featured artist" of the Ars Electronica in Linz, Austria, and shows the exhibition Die Kunst der Biomechanik at the Lentos Art Museum.

The book "Alien Diaries" is published, containing both a facsimile of Giger's original Alien diaries and transcriptions in English and German, and the 15 year anniversary of the Giger Museum is celebrated in Gruyères. ​ On Monday, May 12, Giger dies at a hospital in Zurich from injuries he had sustained in a fall at his house. On May 25, he is interred at the cemetery in Gruyères, within sight of his museum.

An excerpt from the official statement by the Giger Museum on his passing reads:

“As many of you have heard, “Hans Ruedi” Giger, known to the World as H.R. Giger, passed away in May 2014 at the age of 74. We are absolutely heartbroken over the loss of this loving husband, selfless friend, and supremely talented artist.

He truly was one of a kind, committed to his craft, to his friends and to his family. His warm personality, incredible generosity, and sharp sense of humor, were in stark contrast with the universe he depicted in his art. We would like to express our gratitude to the wonderful tributes that have been written following H.R. Giger’s death. These kind words and appreciation of his artistry continue to nourish and lift our hearts at this most devastating of times, and to know that his art has inspired and entertained so many people is of unimaginable comfort.

As much as Giger shunned the limelight, preferring his work to speak for him, he was greatly appreciative of every compliment he ever received and we know he would be amazed and humbled by the kindness that continues to be the subject of his eulogies. In a career with so many star-studded highlights, it is only natural that many have mentioned his world famous brainchild, ALIEN, since the news broke this morning. It was certainly a creation which Giger prized, much as he took great pride in his collaboration with myriads of music industry and film artists, since he began his glorious journey as a world class painter, sculptor and designer.”

H.R. GIGER SIGNATURE VIDEO from DEEP SIDE PRODUCTION on Vimeo.

ART IN MOTION / TRAILER from DEEP SIDE PRODUCTION on Vimeo. 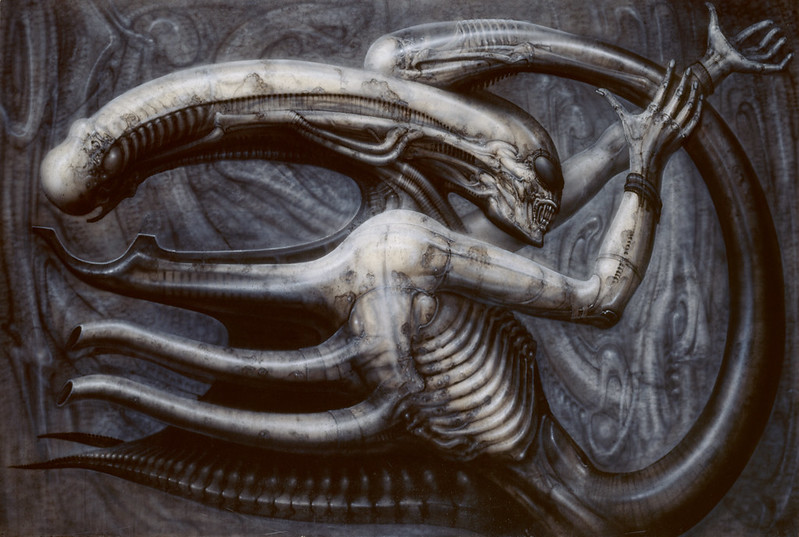 Exhibition at the Fabrik der Künste, Hamburg, 2016 ▲ click for link to panorama
click below ▼ for panorama by Jan Koehn at the 360Cities site

GIGER_TIFF_TRAILER from Leslie Barany on Vimeo.